1) (15 pts) Assume the two coordinate axes XYZ and UVW are initially aligned. Determine the transformation matrix T defining each of the following rotations and translations, giving the new UVW. Rotations stated about XYZ are about the original XYZ axes.

a. Rotate UVW α radians counterclockwise about X, then β radians clockwise
about U’. 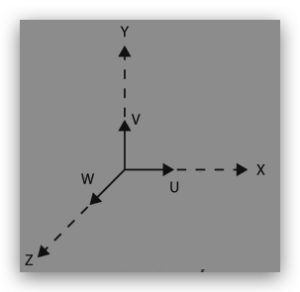 2) (30 pts) Consider the drawing of the right arm, with defined coordinate axes
for the shoulder, elbow, and wrist. Assume the arm starts initially in anatomical
position (palm facing out of the page), and there are zero rotations initially
between the three coordinate axes. In class, we defined the following joint
degrees-of-freedom (DOFs) as rotations about the subsequent angles, as shown
in the table below.

Load the file armKinematics.mat. This file contains a structure variable that has
fields for the joint angles (JA), joint angle names (JANames), and time. The JA
field is a time x DOF data matrix which represents the changes in each of these
DOFs (i.e. joints) over time. Determine the 3-dimensional position of the
endpoint of the middle-finger in the global coordinate frame, assuming (0,0,0)
is at the shoulder. You can take the upperarm to be 32.136 cm long, the
forearm to be 25.77 centimeters long, and the distance from the wrist to the
end of the middle finger to be 10.5 cm in the -YW direction (Hint: Determine
the time varying position of the elbow in the shoulder frame. Then determine
the position of the wrist in the elbow coordinate frame, which is added to the
position of the elbow. Then do the same for the wrist.) Make an 8 x 1 plot, with
the first 7 plots being the angles of the joint DOFs vs time, and the final plot
showing the x, y, and z positions (in different colors) of the middle finger vs
time. You should see oscillations in the x,y,z plots, as this data represents a
series of arm reaches from starting point A to a series of endpoints, and back.

Make sure all axes and plots are appropriately labeled and titled.

You must submit your final plots as a screen shot in your homework assignment,
as well as the .m file that you used to generate your plot. If you are feeling ambitious
(i.e. the following is not required), you can make a movie of the endpoint moving through
the global space across time.