In this programming assignment, you will develop your own AI agents based on some of the AI
techniques for Search, Game Playing, and Reinforcement Learning that you have learned in class to play
a small version of the Go game, called Go-5×5 or Little-Go, that has a reduced board size of 5×5. Your
agent will play this Little-Go game against some basic as well as more advanced AI agents. Your agents
will be graded based on their performance in these online game “tournaments” on Vocareum.com. Your
objective is to develop and train your AI agents to play this Little-Go game as best as possible.

Go is an abstract strategy board game for two players, in which the aim is to surround more territory
than the opponent. The basic concepts of Go (Little-Go) are very simple:

– Board: The Go board is a grid of horizontal and vertical lines. The standard size of the board is
19×19, but in this homework, the board size will be 5×5.

The basic process of playing the Go (Little-Go) game is also very simple:

– It starts with an empty board,

– Two players take turns placing stones on the board, one stone at a time,

– The players may choose any unoccupied point to play on (except for those forbidden by the “KO”
and “no-suicide” rules).

– Once played, a stone can never be moved and can be taken off the board only if it is captured.

The entire game of Go (Little-Go) is played based on two simple rules: Liberty (No-Suicide) and KO. The
definitions of these rules are outlined as follows:

Every stone remaining on the board must have at least one open point, called a liberty, directly
orthogonally adjacent (up, down, left, or right), or must be part of a connected group that has at least
one such open point (liberty) next to it. Stones or groups of stones which lose their last liberty are
removed from the board (called captured).

Based on the rule of liberty, players are NOT allowed to play any “suicide” moves. That is, a player
cannot place a stone such that the played stone or its connected group has no liberties, unless doing so
immediately deprives an enemy group of its final liberty. In the latter case, the enemy group is captured,
leaving the new stone with at least one liberty.

– Example 1. The white stone is captured after Black plays at position 1, because its directly
orthogonally adjacent points are occupied. 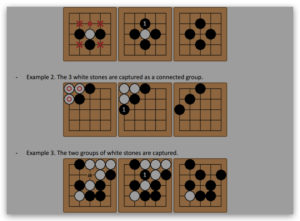 – Example 4 (Special example). This example illustrates the rule that a capturing stone need not
have liberty until the captured stones are removed.