Given , find a complementary CMOS circuit that implements X. Select
device sizes so the output resistance identical to an inverter with an NMOS W/L = 2 and PMOS
W/L = 6. What input pattern(s) would result in the worst and best equivalent pull up or pull
down resistances?

The figure below shows a circuit that implements a logic function 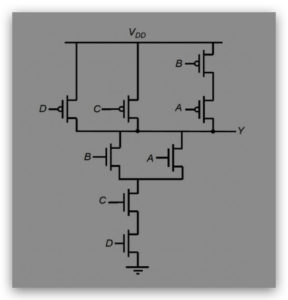 Answer the following questions about the circuit:

a) Derive the logic function of the transistor network. Size NMOS and PMOS devices so
the output resistance is the same as an inverter dimensions: NMOS W/L = 4 and
PMOS W/L = 8.

b) Find the input patterns that give the worst case tpHL and tpLH. State the initial input
patterns clearly and specify which input(s) must transition in order to achieve this
maximum propagation delay. Consider the effect of the capacitances at the internal
nodes.

A. Do the two circuits above implement the same logic functions? If yes, what is that logic
function? If no, derive a Boolean expression for both circuits.

B. Do these two circuits always have identical output resistances?

C. Do these two circuits always have identical rise and fall times? Why or why not?