This project represents a substantive programming exercise. Like all work for this class, it is to be completed

individually: any form of collaboration is prohibited, as detailed in the syllabus. This project is considered a take-home exam.

If you have not completed your E20 simulator, please do so before beginning this assignment.

Your task is to write an E20 cache simulator: a program that will monitor the effects that an E20 program’s execution has on a memory cache. This project will build on your E20 simulator, by adding a simulated cache subsystem.

Each cache will be defined by three parameters, given as integers: the size of the cache, the cache’s associativity, and the cache’s blocksize (measured in number of cells):

The total size of the cache, excluding metadata.The value is expressed as a multiple of the size of a memory cell. This will be a positive integer power of 2 that will be at least the product of the associativity and blocksize.

Your simulator will monitor the effects on the cache or caches while executing an E20 program.The output of your simulator will be a log of all cache hits and cache misses, in chronological order, caused by all executed lw and sw instructions.

If there are two caches, then the write to both affected caches should be logged separately, as follows:

In the above case, the data was written to both L1 and L2, as dictated by a write-through policy.

Alternatively, in the case of a hit, you should indicate that there was a hit:

If there are two caches, then we will consult the L2 cache only when the L1 cache misses. In that case,the access to both affected caches should be logged separately, as follows:

In the above case, the read was a miss on L1, but hit on L2. Another situation to consider is when the read misses on both caches.

For the purposes of this project, we assume that instruction fetches bypass the caches, and therefore will not be logged. In a real computer, reading instructions from memory, just like reading data, would be cached.

For memory reads, if the desired cell is already in a cache, it will result in a hit. When there are two caches, a memory read will access the L2 cache only when the L1 cache misses. Consider the following diagram describing the logic: 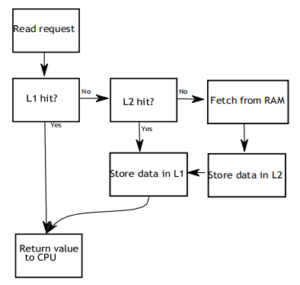 For memory writes, your program will use a write-through with write-allocate policy in all cases. That is, a memory write will simultaneously write the value to all caches, as well as memory. Effectively, writes are handled by the caches as if they were misses.

For associative caches, your program should use the least-recently-used (LRU) replacement policy. This policy is relevant when an associative cache line is full, and a memory access causes a new block to be cached to that line, so we need to evict one of the blocks to make room for it. The block that is to be removed is always the block that has been used least recently. Here, “used” means read (via a cache hit), written (via a cache miss), or written (via a memory write). Therefore, whenever you access a cache, you will need to update bookkeeping to keep track of the order in which blocks have been used.